NOTE: All characters return from each Magical Drop game.

NOTE: From stages 2-7, one group of characters will be chosen at random. Fool remains on the first stage, Fortune remains on the final stage, and Burnz can be challenged on the secret stage. However, they do not count on some of these groups. See "Trivia" for the objective on how to reach Burnz's stage.

NOTE: The player must defeat all of the characters that were shown in this exact order. 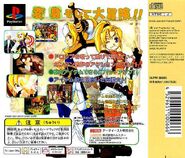 Concept artwork of all characters (except Burnz)

Tarot cards for all characters (including modes) 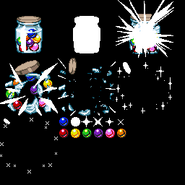 Sprites of the Magical Drop jar being shattered

Another gameplay of 1P Puzzle Mode

Justice at the final stage of 1P mode

High Priestess at the final stage of 1P mode

High Priestess at the secret stage of 1P mode
Community content is available under CC-BY-SA unless otherwise noted.
Advertisement